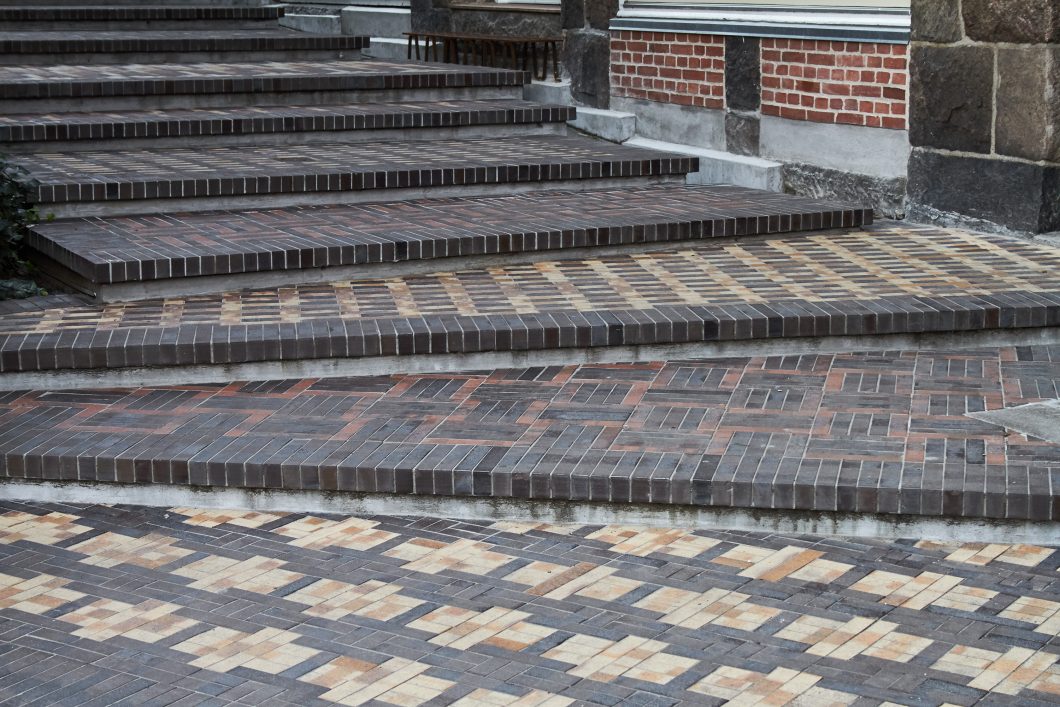 Munkestræde alley connects the central town square with the railway station. The renewal is part of a strategic transformation of the many laneways connecting the town centre with the harbour front.

‘[…]  The large brick covered steps gave room to experiment with brick bonds and patterns referring directly to local historic buildings and in some cases as an abstraction of the local style, but also one reference to modern Nordic Noir Drama, the pattern of Sarah Lund’s sweater from ‘the killing’.

The design is a modern playful iteration of the historic context.
An invitation to a short journey in history walking with the monks.
‘The changes of the street-structure have had a positive impact on the pedestrian flow’
Svendborg municipality

It was vital to construct a more comfortable stepped ramp. The built stepped ramp has deep treads, comprising 28 long steps running over 30 meters. These bricks covered steps enabled the exploration of brick bonds and patterns.

The large steps progressively shift horizontally along the path in response to the restrictions of the site, as well as to reflect the dynamic shape of the alley, which has been shaped by the construction of the surrounding buildings over time.

The steps are centred in the alley, floating and detached from the walls of the neighbouring buildings.

The continuous gap on either side of the stepped alley is a conceptual approach to accentuate the free movement of the path, as well as a pragmatic solution to the rainy conditions of Denmark by acting as two parallel gutters.

Furthermore, this continuous gap is used for indirect lighting of the alley, gently highlighting the contours of the stepped route at night

The paving is a reference to the historic use of monastic bricks dating back to 1200 AD. It also creates a dialogue with the façade of the building that frames the alley. The building, erected in 1916, is built in the Arts and Crafts architectural style (the Scandinavian version named National Romanticism). It is constructed of warm red brick with a heavy base of grey ashlar blocks and façade ornamentation in grey chiselled stone, hence the choice of warmly toned bricks and parallel channels of calm grey concrete for the new paving.

Historically, this alley was the main route from the abbey church to the well for the Franciscan monks of Svendborg, from around 1200 AD onwards. Munkestræde translates to ‘The alley of monks’ or ‘Monastic alley. The alley embodies invaluable historic connections and it was obvious choice to emphasise this by using brick, just as the monks did for their abbeys from 1100AD. The bricks they used are slightly larger than the modern bricks we use today, although this type of brick still exists in Denmark, named the monastic brick.

The alley was reconstructed in the 1970s using concrete bricks, resulting in an uninviting space in poor condition. It was clearly time to reinvigorate this important pedestrian link for the town.